Follow Erna Janine, founder of @freeweaver_saori_studio in her textile residency in India

Follow Erna Janine, founder of @freeweaver_saori_studio in her textile residency in India

First stop is visiting the silk tribes in Fakirpur, roughly 8 hours south of Kolkata. In 2017 Erna Janine was the participant in the DISC The Art program "the Never Ending Thread" there, a collaborative textile art project created over three months traveling through rural east India along with a group of ten international artists. Erna Janine has been using the forest silk from the tribal areas near Fakirpur in her weaving pieces ever since. 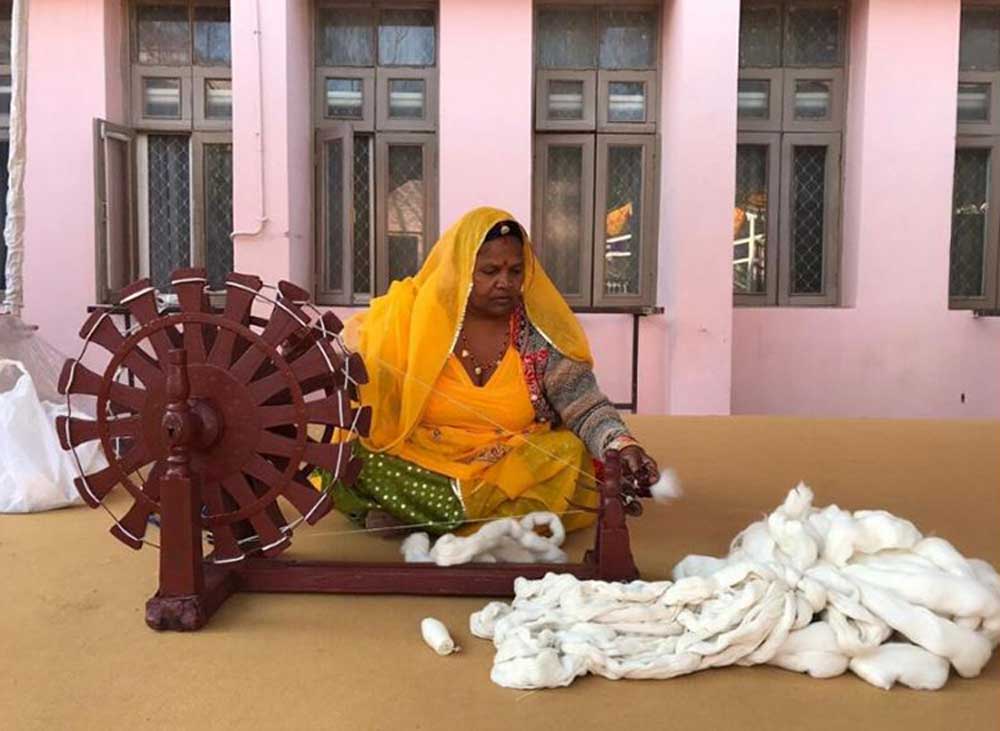 "After two years away I have returned to the small village in East India where I spent some months in 2017. During this trip. I will focus on sourcing natural fibres and document the harvesting/spinning and dyeing processes. The first fibre I looked at is Jute, which I have used in my weaving studio for some time. The whole process of production is done in the same area, spread out over just a few villages. The jute itself is grown on farmland and harvested twice a year. Its then retted in a nearby river for 6-8 weeks, processed into dry fibres in the second village and finally spindle spun and dyed in the third village. The jute from this area is woven on small heddle looms and used for bed mats and saddle bags."

"During the second leg of the India, I went to Jaipur to attend the “Globalisation of Khadi, Khadi: A Way Ahead” conference in Jaipur on behalf of The Festival of Natural Fibres which takes place at Craft Central every year. Khadi is a very special fibre which I have used in my studio for some time. It is natural cotton spun by hand on a small portable spinning wheel called a charkha, as suggested and practised by Gandhi. A powerful presentation on the underlying philosophy of self sustainability and personal independence was held by Craft Central’s regular Khadi spinning teacher Asha Buch. I did a small presentation on the Festival of Natural Fibres and my Saori weaving practice."

"After spending time in Calcutta and Jaipur, I flew to Dimapur in Nagaland to spend time with several of the tribal loin loom weavers. Loin loom weaving is one of the oldest forms of weaving and in its simplicity, it is also equally practical as versatile. The loom itself is not more than a wooden and bamboo sticks, easily transportable up the steep and isolated Naga Hills, where most of the tribes still reside. Historically an isolated region, Nagaland weavers mainly weave for themselves and each tribe has their patterns and easily recognisable attire."