The weekend of August 21st saw The Forge, an iconic venue in the Isle of Dogs in London, buzzing with activity. Visitors trouped in from across the UK and further afield. The Festival of Natural Fibres, now in its fourth year, is an annual event designed to bring together fashion and textile designers, brands, sustainability experts, students and activists – to focus on how to drive the changes required. 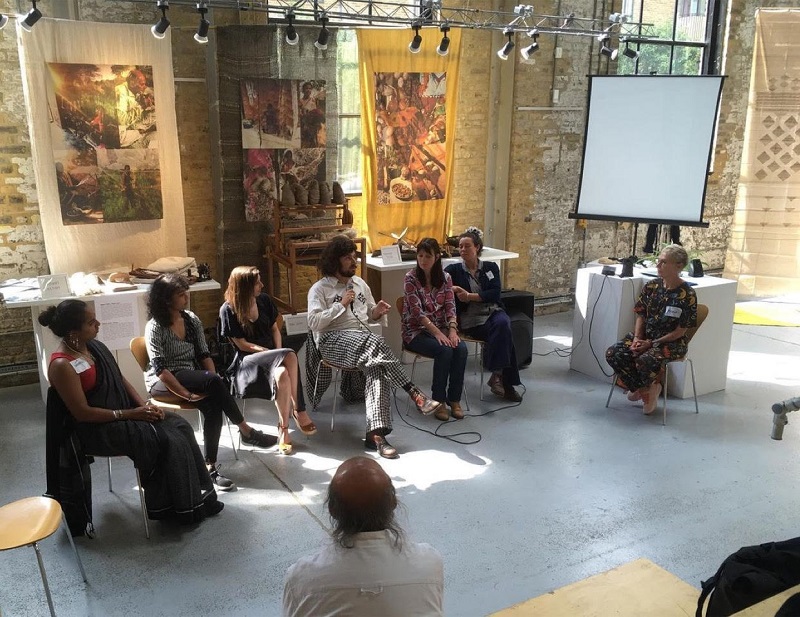 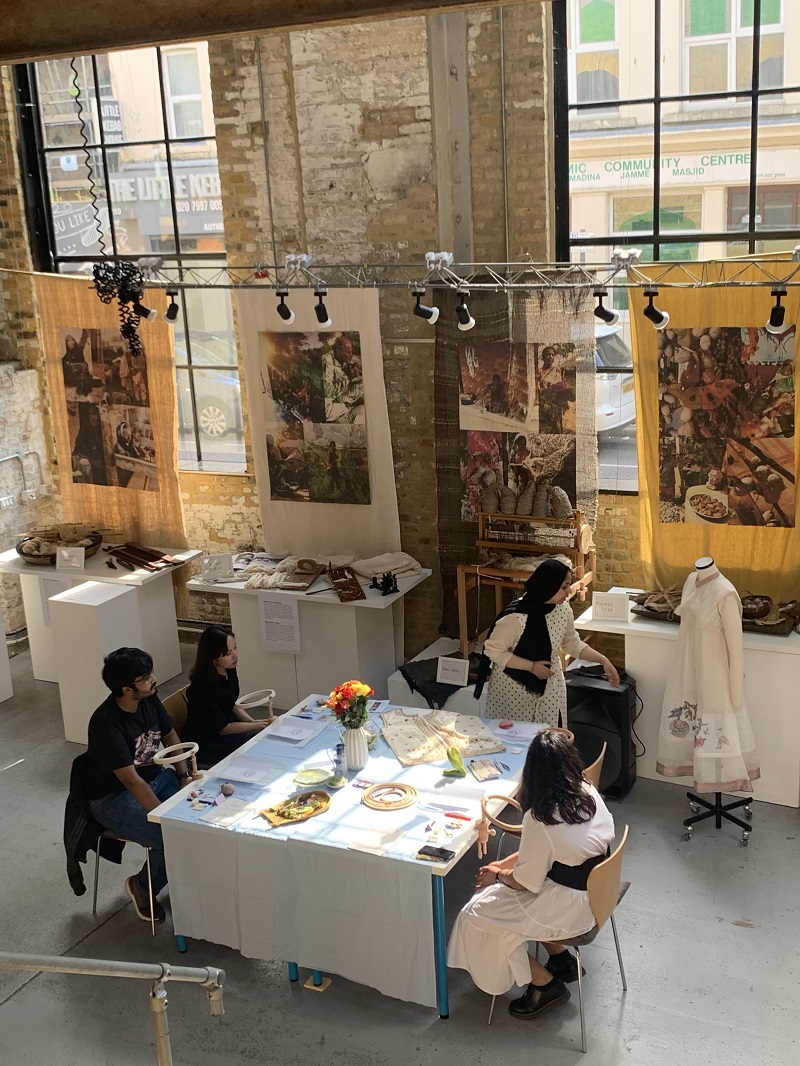 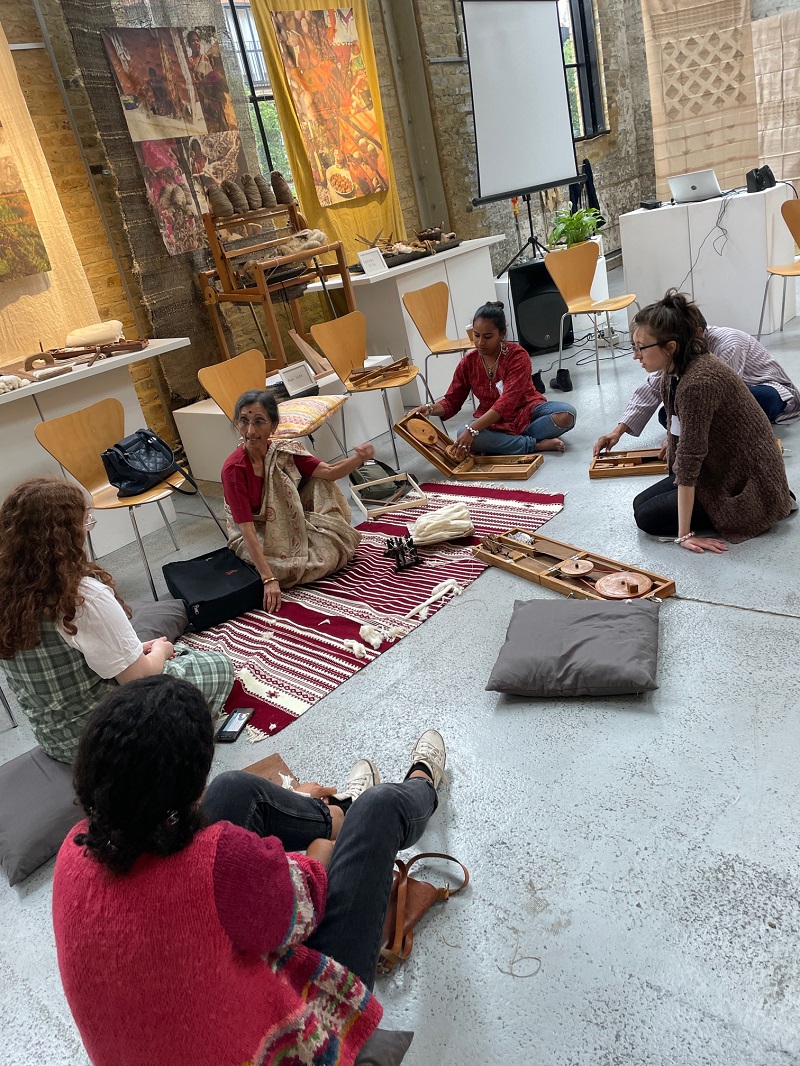 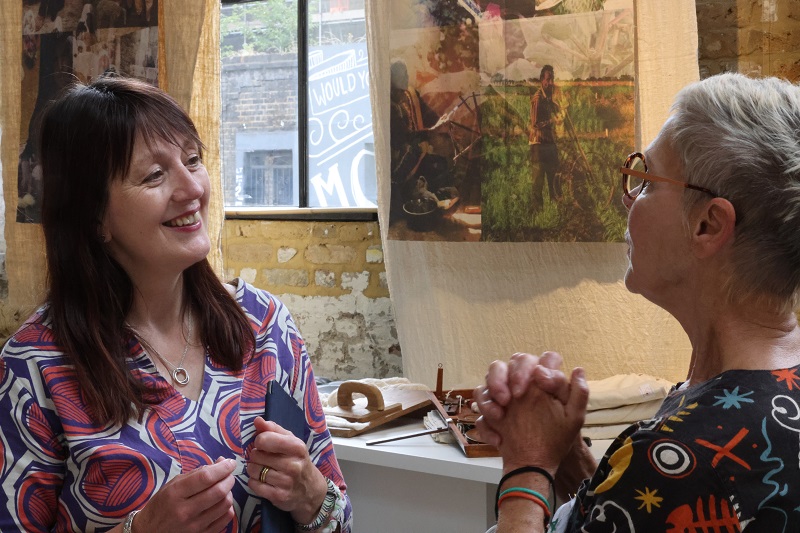 The United Nations’ recent Intergovernmental Panel on Climate Change (IPCC) report outlines a ‘code red for humanity’ – confirming the urgent need to stop using fossil fuels and producing greenhouse gases. The fashion and textile industries are one of the top co2 and waste producers. A recent RSA report on plastic in the fashion industry showed that the majority of ‘fast fashion’ brands use virgin plastic in their clothing, with around half of new clothing created from 100% virgin plastic.

The ongoing festival is the brainchild of Kishore Shah, founder of Khadi London who said ‘The goal of the festival is to create a movement for change. There are so many natural fibres available in the UK, India and other parts of the world that can be used to create beautiful fabrics with far less impact on the planet, as well as supporting skilled livelihoods.’

‘Reconnecting Farming to Fashion’ was this year’s theme. This was brought to life by an exhibition showcasing British and Indian natural fibres – cotton, wool, forest silks and jute in the case of Indian fibres and wool, flax, and hemp for British fibres – including the processes to turn these into fabric. Curated by Erna Janine and Saumya Singh, the exhibition struck a crucial balance between aesthetics and content.

The format for discussion was interactive, with a range of panellists from brands, designers, farmers, producers and industry experts. The conversations continued beyond the panel sessions – around the spinning demonstration, at the community quilting space, in the café space over tea and cake or chai and samosa.

A bonus this year was the presence of students and recent graduates who had worked with khadi – and hand created fabric from India. They inaugurated the festival with the shaking of an embroidered forest silk banner, embroidered with a quote from Gandhi, ‘in a gentle way you can shake the earth’. The students, Sarah, Misha, Morgan, Molly, Ashna and Caitlin were the panelists for the first session. The panel was moderated by Safia Minney, author, activist and founder of pioneering fashion brand People Tree.

The session explored the interaction of the students, mainly from Chelsea College of Arts, London, with the materials they had worked with and exploring the distant interaction they had with artisans in India working to their design - through Zoom meetings and WhatsApp groups due to travel restrictions caused by the pandemic.

Saturday’s events continued with a panel discussion on Climate Change, moderated by Jo Salter of Where Does It Come From? with panellists Safia Minney, Esther Triekens (CEO of NGO Action Village India) and Asha Buch of Khadi London. All agreed that urgent action was needed on several fronts: community action, non-violent campaigns and legislation.

In the context of fibres, fabrics, and fashion a campaign against plastic fibres should be the call of the day.

Sunday was devoted to discussions on natural fibres, Indian fibres in the morning and British fibres in the afternoon. The conversation in the morning soon turned to looking at wider generic issues. Unpacking the various strands around circularity, regenerative, organic, sustainable, and ethical was explored at length. The relationship of designers with brands and markets was also explored.

There was lively discussion on the relationship between craft and technology. Was it possible to retain the human touch and engagement with the material when technology came into play? In weaving for instance, was it possible to replace the drudgery of hand weaving without the use of power, solar or other. Soma, a panellist and technology specialist, outlined work on loom designs which may make this a possibility. The weaver could continue to be a crafts person without becoming an industrial worker.

British fibres have come a long way in the four years since the festival’s inception. The panellists this year were passionate about their fibres - wool, flax, hemp, leather and nettle. Making these UK produced fibres viable for the market will require infrastructure and support, with a need to recognise the artisans in the process to ensure the traceability remains – imagine being able to buy a jumper and know which sheep the wool came from!

Sunday ended with enthusiasm to widen the audience and grow the movement for natural fibres. During the following week visitors were welcomed to the Forge for workshops and to view the exhibition. Several workshops and demonstrations took place during this time, offering the public an opportunity to gain some hands-on practical skills. These included Saori weaving, charkha spinning, creative sewing, Nakshi Katha embroidery and botanical inks/art book making. Nadia Piechestein from TLZ Movement Clothes, held a number of live-stream and IGTV events on simple clothing repair and oversaw the Community Quilt Project using khadi offcuts.

The event was organised by a core team from Khadi London, Freeweaver SAORI Studio, and ONE. Apart from being a part of the organising team, Erna Janine of Freeweaver SAORI Studio played the important role of facilitating with Craft Central. Paula Wolton of ONE’s role in getting speakers on board was crucial. A team of four people from Khadi London helped with organising the event; Kishore Shah, Jo Salter, Saumya Singh and Ashna Patel.

ONE, led by Paula Wolton began as a touring installation, OneHutFull, to campaign for sustainable wool production in a hill farming context. It has evolved into a project bringing together those who support ethical, sustainable, and responsible practices in textiles and fashion. http://www.onehutfull.org/

Craft Central is provided the perfect venue for the Festival  at its home in the Forge – a magnificent Grade 2 listed building, - part of 19th Century ship and girder bridge building history – which now contains an architect-designed free-standing birchwood construction housing business studio, workspaces, meeting rooms and a large exhibition space.

The exhibition on Indian fibres is sponsored by the Gandhi Foundation and was created and curated by Erna Janine and Saumya Singh highlighting four distinct hand spun, handwoven natural fibre types: regenerative cotton, nomadic wool, forest jute and forest silk. The exhibition shows how these fibres can be transformed into fabrics in a natural sustainable way in rural areas.

This exhibition has been designed as a Travelling Exhibition and will be showcased at various venues within London and elsewhere in the UK. Designs of winning students of the Chelsea Khadi Project will also form a part of this exhibition.

The Chelsea Khadi Project is a collaboration between the Indian High Commission, London, Chelsea College of Arts and Khadi London. The final outcome, adaptation of the student designs for khadi was supported by partners in India. These include Khamir in Gujarat, Grameen Vikas Pratisthan in Chhattisgarh, Gram Bharati Samiti in Rajasthan and Hind Natural Dyes, also in Rajasthan.

Jo Salter, Founder and CEO Where Does It Come From?, Ethical Business Consultant